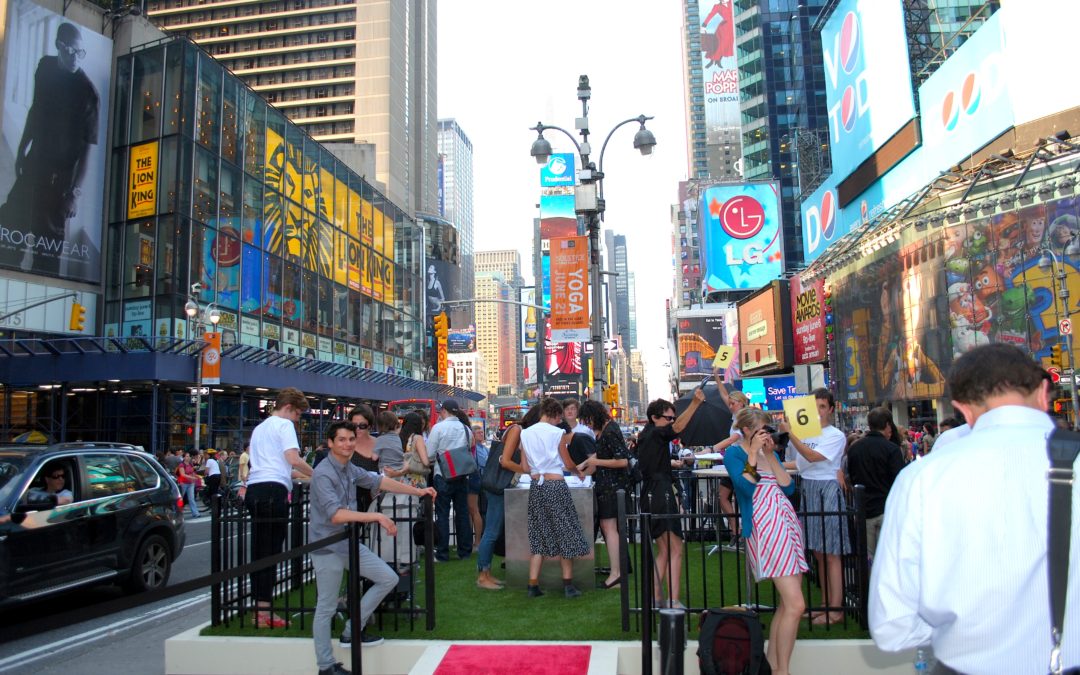 Time Square Loves NewGrass! That’s right, NewGrass® synthetic lawn is on public display again in New York City. This time right in the middle of Times Square in conjunction with a citywide public art project. The kicker? This is a summer feature, but NewGrass cures winter blues too.

This is why Time Square loves NewGrass. Between June 3rd and 27th, NewGrass is providing ground cover for Tie Square. it will be a symbolic, temporary “town common” space. About 16 feet square, this art project is at the heart of Key to the City. Just what is Key to the City? It is a public art project from the mind of Paul Ramírez Jonas. Production was funded by Creative Time, a nonprofit organization. Creative Time  commissions “artwork for the masses globally (and not in a gallery setting, but on our streets),” according to the New York Village Voice.

With Key to the City, Ramírez Jonas has created a functional key—a key that unlocks 24 spaces ranging from museums to community gardens to graveyards across New York City’s five boroughs. The concept for the project is this. A key to the city is a gift that any average citizen can give to anyone else. hence it is not an exclusive token granted only to dignitaries or heroes.

At the Key to City common in Times Square, landscaped by NewGrass New York, anyone who wants to can award someone a key for whatever reason they like. With the key in hand, the recipient can go on a citywide exploration to find the 24 spaces the key will unlock. Of course, there are plenty of opportunities to find a shady spot for rest along the way.

“We have 25,000 keys to give away, so that’s a lot of people who will be visiting the common here in Times Square over the next four weeks,” said Gavin Kroeber, a producer with Creative Time.

When it came time to design the town common, Kroeber first considered using natural sod grass. But that idea gradually proved highly impractical. First, the grass would need to be in some kind of container or bedding. Also, it would require watering. And finally, it would need constant attention throughout the event.

“We’re talking about more than 25,000 people walking across this area over the next four weeks or so,” Kroeber said.

So Kroeber considered artificial grass. He said he first considered NewGrass because of the way it looked in photographs on the company’s website. and he ultimately chose NewGrass because of the “incredibly life like feeling” of its samples. Kroeber said the NewGrass president would ensure compliance with the Americans with Disabilities Act. Basically, it had to be easy for wheelchairs to travel across.

“I’ve got to say, the installation is even better than we expected,” Kroeber said earlier this week. “It’s so lifelike, people think it’s real. It really makes the common feel like the real thing.”

Last summer, NewGrass appeared in the window display of the Ralph Lauren flagship store on tony Madison Avenue. We are thrilled Time Square loves NewGrass. We expect many more opportunities to showcase the benefits of artificial grass in the metro area.